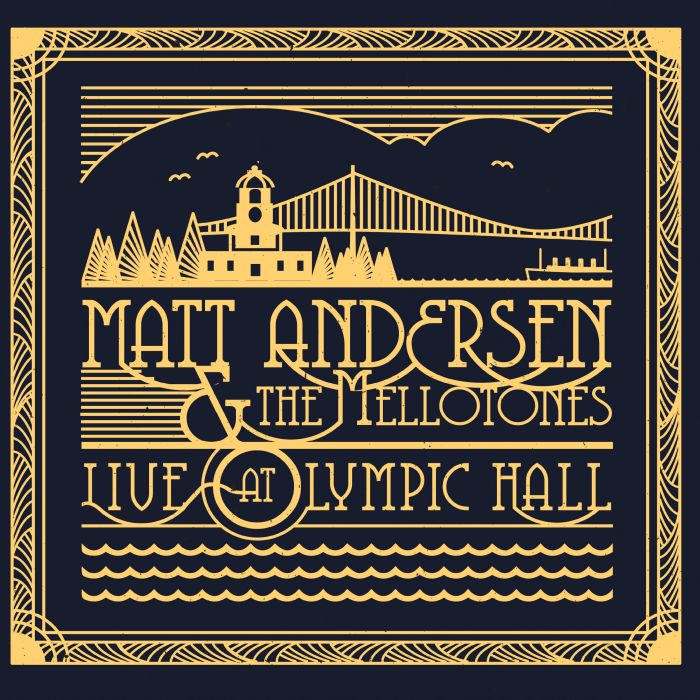 From the first notes of “Weightless” to the slow-dying roar of the crowd as the last licks of “Devil’s Bride” squeal out, Matt Andersen and the Mellotones Live at Olympic Hall is a rollicking, sizzling night of Andersen’s thunderous voice and hot guitar playing mashed up with the ten-piece force of nature that is the Mellotones, all captured at a historic dance hall in downtown Halifax. Andersen calls it “the most drastic thing I could do,” a far cry from his usual one guy, one guitar context. “I make an impact when I’m solo by getting them with the quiet parts more than the loud parts. With a band it’s the opposite.” And if you’re going to have a band, it should be the Mellotones. Long a staple of Halifax’s live music scene, the band features a smoking horn section along with keys, drums, and more. “I felt like a rock star,” Andersen says. A stirringly soulful singer with powerful songs and a live band that cooks are two of the elements that go into making a live record a success. The third necessary element is, of course, a live audience. And Andersen had one that was hot to trot. “They were a really great crowd,” Andersen says. “To look out into the audience was pretty special from that stage, they sold the balcony too, so there were two tiers of people.” Andersen was particularly pleased to play at Olympic Hall. He loved seeing the old signs of its dance hall past—photos on the walls of audiences dressed to the nines, sitting at round tables, with space in the middle for dancing. Andersen’s show, though, was a less formal affair, with the sold-out audience on its feet from start to finish. “I don’t get to play shows with everyone standing up, I usually play soft-seater shows, so it was great to get on stage and have that kind of energy. People were excited, the band and the audience both.” Andersen wanted to make a live record that would be something fans could come back to again and again, the way he did when he was a kid, with Eric Clapton Unplugged. “It’s a bit of a subconscious confirmation that it is real. You can’t really fake it. A lot of people like to have that representation of what happened. Anytime I play a show, people ask, ‘which album is most like your live show?’ They want to take home their experience.” Andersen notes that for artists who don’t get a lot of radio play, “live music is vital.” And more than that, he says, “I think it’s a basic connection, to be part of that energy going on. I just wish everyone could come to a live show. It’s the best way to hear music for sure.”

Reviews
Write Your Own Review
Newsletter